Thanksgiving has come and gone, which means it is official: Christmas is on its way! If you’re one of those people who has gifts purchased and wrapped by Black Friday, then this post isn’t for you... for everyone else, here are some great suggestions for mid-century modern Christmas gifts. From the top coffee table books to stocking stuffers with modern style, use this mid-century modern gift guide for friends, family members and stylish people everywhere. Mid-Century Modern

If you find a piece of metal wall art, there’s a good chance someone, somewhere, has attributed it to C. Jeré. Works under the name C. Jeré are very common, but they can be harder to authenticate. Part of that is because there is no one sculptor named C. Jeré! C. Jeré, sometimes also called Curtis Jeré, is a blend of two different names: Curtis Freiler and Jerry Fels. This combined nom de plume (nom de métal?) came to be in 1963, when the two brothers-in-law joined forces wit

Buying a mid-century modern home is an exciting event, and it is normal to spend a lot of time and effort focusing on the interior. However, don’t forget that most visitors will first see your home from the exterior. Does the view from the street or the driveway reflect the fabulous interior within? Here are some fantastic tips to help you boost the curb appeal of your mid century modern home. Cut Back Vegetation Some of the most stunning mid-century modern homes are located 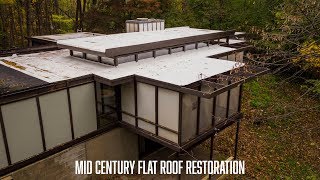 This project was a labor of love, and we're thrilled to be able to show you the results! Thanks to Kalamazoo Aerial Media for the excellent work showcasing the changes. Stay tuned for an upcoming blog post detailing the process. This will be an excellent resource for anyone curious about the work involved - or anyone who is planning to tackle a similar restoration project in the future!

Learn how to create the perfect mid century modern nursery in your home. Our list features five must-have MCM elements.